skip to main | skip to sidebar

The paintings that follow are a sampling of the work I've done over the past forty years. They are in oils and acrylics on canvas primarily. There is a section devoted to other mediums. The photos of the paintings are published in small size, but detail shots may be enlarged.
These pieces have been organized into the Four Elements of Earth, Air, Fire, and Water. Each blog entry will present another element.
I do have prints of many of the pieces. Please contact me by email at www.moriainsantafe@yahoo.com regarding purchases of originals or prints. Some of these pieces are also available on t-shirts, canvas bags, and other objects on my Cafepress website (see sidebar).

In this post I cover the time from attending the University of California at Santa Cruz through my years in upstate New York, and into our time in Pennsylvania, when I was immersed in running a bookstore and raising twins.
These paintings share a common frontal approach which related to medieval altarpieces. The tend to be heavily symbolist. In my younger days I thought a lot!

The Circle of Life 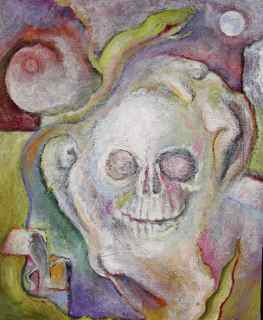 This small oil was one of the first things I did when I went to UC Santa Cruz. It reveals my interest from an early age in the cycle of birth, death, and rebirth. Later this became central to my spiritual path.
Oil on Canvas, 8" X 10"
NFS/Personal Collection 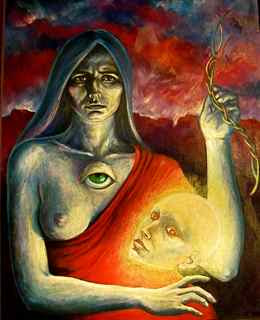 Intertwinned is a self portrait I did in college around 1972. It contains very personal and significant imagery regarding my relationship with my closest friend, and my art. All tied together...
Oil on canvas, 30" X 40"
NFS/Private Collection, California
The Rape of Mary 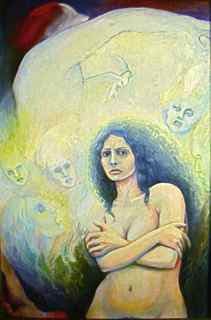 This is a portrait of one of my college friends. A virgin, she was being pressed by a male friend to have sex. All the peer and societal pressure of the time (1972) was on this young woman, who had only her own will to hold up against it. This situation led me to think about the patriarchal idea that the Virgin Mary would have been thrilled to learn she was being impregnated by God. Maybe yes, maybe no.
Oil on Canvas, 32" X 48"
NFS/Private Collection, California 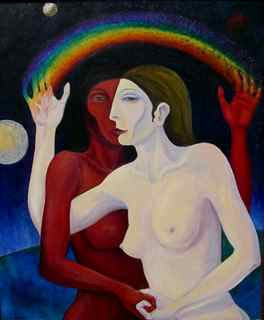 This oil, painted in my studio in Ithaca, NY, was my first serious attempt at painting after a long hiatus. I had spent the years following graduation first traveling in Latin America, and then pursuing a back-to-the-land lifestyle with my husband to-be, Steve (We've now been married 32 years!).
This piece harks back to Intertwinned. But whereas that piece dealt with an outer relationship, this one delves into the chthonian realm of my subconsious to try to recognize and reclaim a part of myself which had long been buried.

The King Must Die 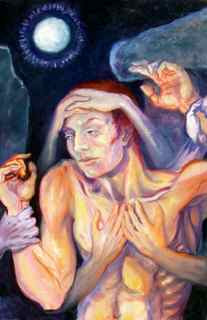 This piece relates to one in the post titled Fire, the painting of the antlered being in Willing Sacrifice. I grew up as a Christian, but my spiritual quest led me down other, older paths. I learned that the concept of a sacrifice made for the benefit of the people was an ancient and wide-spread idea. I examined it in this painting, identifying both with the sacrificial king, and with the loving hands pressed against his breast in farewell.

I have made prints of many of the paintings depicted. These are high quality "xerox" prints in three sizes, and are for sale matted (size indicates the print size, mat is larger): Small is 5" X 7",$25, Medium is 8" X 10", $35, and large is 11" X 14", $45. The price includes shipping and handling. To purchase prints or originals, contact me by email at: www.moriainsantafe@yahoo.com

Moria Peters
I have been creating artwork my entire life. I majored in art at UCSC, and have continued to pursue creativity in a great many different ways ever since. I paint mostly in oils and acrylics, as well as doing graphics. I have done everything from creating murals and canvases, to tattoo and t-shirt designs. I have a website with Cafe Press where some of my paintings are available printed on t-shirts and other objects. You can go to that site by clicking on my profile, below. I am also a dedicated organic gardener, having created vegetable and ornamental gardens across the country for almost forty years, I strive to learn how humans can live upon the earth in a way which promotes life, balance, and beauty. This interest has led me to Permaculture, which I try to integrate with aesthetic consideration. I am available for landscape and garden design and consultation. My approach is to work in harmony with the givens of the environment, using strictly organic gardening techniques. I consider gardening another medium for my art.